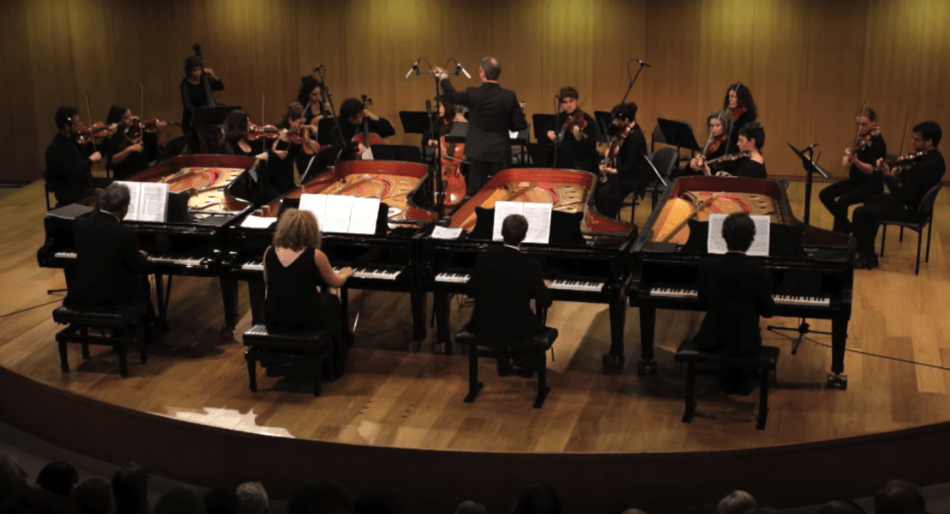 Today I’d like to share with you a concerto for four pianos by Johan Sebastian Bach (1685-1750). The piece was originally composed by Antonio Vivaldi (1678-1741) for four violins.

Let’s pause for a second and talk about Bach and Vivaldi. Both are superstars of the Baroque period. Bach lived all his life in Northern Germany, travelled very little, was a well-known organist, but gained fame as a composer only after his death. Vivaldi was born in Venice and travelled extensively around Europe. He was famous as both violinist and composer during his lifetime. This is why Bach transcribed Vivaldi’s music and not the other way around.

I am sharing with you two performances of Bach’s concerto. One by MultiPiano ensemble , an Israeli group of four virtuoso pianists.

The other performance is from 2002, with all-star performers Martha Argerich, Egveny Kissin, James Levine, and Mikhail Pletnev – and these are just the four pianists. They are joined by Sarah Chang (violin), Yuri Bashmet (violin), Mischa Maisky (cello), and others.

And then there’s the Vivaldi original: